The Access Virus is a music synthesizer that was first sold around 1997. It was one of the first “virtual analog” synths, which means that it uses computer code that simulates the behavior of analog circuits, rather than using computer code to play back samples. This approach brought more liveliness to its sounds compared with other synths of the time, and this appealed to a lot of different kinds of musicians. The Virus was a staple of many studios in the late 90s and through the 2010s, with people like Hans Zimmer, The Prodigy, Tool, Jean Michelle Jarre, Nine Inch Nails, Sasha, and Tycho being a handful of the notable musicians who have used it in their music.

I first heard about the Virus from a friend of a friend a few years after I started making music. I was working at Yahoo at the time, and my dear friend Mona (who also worked there) introduced me to her friend Aaron. He also worked at Yahoo and was an accomplished musician and had interviewed Autechre, which was like +100 charisma points in my world. We got to talking about music making, and he had all kinds of nice things to say about the Virus. So I looked it up and yep, it looked awesome, so I bought one for about $1200 from my local Guitar Center.

It fit well in my little setup, and allowed me to do things that I had never been able to do before. It was beautifully German-made, with a heavy gauge metal front panel, wooden end-panels, and a bunch of buttery smooth knobs and very nicely clicking buttons. It came with a slim and well-written manual, and so I was off and running with it.

Shortly after getting it, so this is probably around the 2000 timeframe, I came across the “Access-List” – an email-based discussion list dedicated to all things Virus. Marc Schlaile (bizdev and product management for Access Music to this day!) was the main keeper of the list, and Christoph Kemper, the inventor of the Virus was also a fairly active member. There were many other friendly folks on the list, including sound designers extraordinaire Rob Papen and Howard Scarr and a nice guy and ace sound designer Ben Crosland, who ended up working for Access. Lucky guy!

I was pretty active on the list, since the conversation was usually fun and productive. I remember a long-lived thread on using the Virus to make a quadraphonic helicopter sound, using 4 of its 6 outputs. Another thread was Howard Scarr teaching us how to make a stair-stepped modulation by using two sawtooth LFOs and inverting the modulation amount of one and setting its rate to some multiple of the other. Since the values were added together, it would create steps instead of ramps – fun stuff like that.

The Virus was really the centerpiece of my music-making during that time. It was so fun to make sounds on it, and so I began to share those sounds with the Access-List. There was a lot of sharing in that community, and I feel like I learned a lot from the people there. One day I thought to just package up my best sounds and share them as a .zip file with the list. Marc from Access saw this, and asked me if he could put that .zip file on the access-music.de website for people to download. Ummm… YES! That was the coolest thing.

One great thing about the Virus and the people that made it is that they would regularly add capabilities to it via firmware updates. This is like upgrading the OS on a computer and getting something new like video conferencing.

Access really blazed a trail in the world by making these updates available for free. Now we take that kind of thing for granted with our computers, phones, cars, etc. Shortly after I got the Virus, Access released an update to add a Vocoder effect which blew my mind. They released more sophisticated hardware as the years went on – eventually there was a Virus B, Virus C, Virus Indigo, Virus TI, Virus TI2. Each one was a significant step from the prior, with the TI series (TI meaning “total integration”) becoming one with the computer it was attached to, as both an audio interface as well as being fully computer-controlled if you wanted to use it that way. This was another revolutionary development by the Access team. I was still happy with my simple little Virus A though.

Around 2003, Marc from Access got in touch with me again. Access was releasing a new operating system update for their newer hardware, and part of this update was expanding the set of presets in the synth. Pretty much any synth comes with a bunch of preset sounds, which serve to show off the capabilities of the equipment, serve as a starting point for other sound designers, or just simply to be used in music. Marc asked me if Access could use my sounds in their upcoming firmware update. Ummm… DOUBLE YES! This took top spot as the coolest thing. From that point on, anyone who bought a Virus or updated their existing Virus would have my sounds. To this day, I consider that my biggest musical accomplishment.

Access sent me a care package of a Virus t-shirt (I still have it), some software (SoundDiver, Access edition, IIRC), and some other Access/Waldorf schwag. I was totally stoked.

By this point, my music-making was tapering off. I was getting married, and there wasn’t room in my life for music any more (bad decision, Zack). The Virus started collecting dust, so I decided to sell it. I ended up selling it to a young guy for $500. We met at the BART station in Fremont, and I said goodbye to my little red buddy.

It would be a long time until I heard it again.

That time came in 2016 when a coworker mentioned he had a newer Virus. WUT. That was too cool. He offered to bring it into the office so I could mess around with it. Sure enough, after I powered it up and navigated to preset bank H, there were my sounds. It was the Virus TI without a keyboard, so I couldn’t really play my sounds, but there they were. Pretty cool to hear some of them again, even if it was just a middle-C note that the virus would play if you held two of its buttons down simultaneously. That was a fun afternoon.

Around that time, I was getting into music again. I was single again and had some great friends who I was telling about the old days making music in my living room. They could probably feel my enthusiasm in telling the story, and they asked me why I wasn’t doing this now. Yeah … why wasn’t I doing this now???

So I started making music again. By this time, computers were powerful enough to do everything “inside the box” – meaning, no external hardware was needed to make music. Everything you would ever need existed in software. The music studio was now the size and shape of a laptop. Cool times indeed!

There was one thing that was not inside the box though … an Access Virus. :(

Fast forward to January 2022. Through some random internet surfing, I came across a project whose intent was to have a Virus inside of the computer. The project I found was, at its heart, an emulation of the Motorola DSP chip that powers the Virus line of synthesizers. On my current music computer, this requires only about 3% of the computer’s CPU to emulate one whole Virus. The project creators built an on-screen UI to provide access to the Virus’ functions, but due to licensing reasons, do not provide the operating system code that turns the DSP chip into a Virus. That is easy enough to find on the internet, though.

The project runs flawlessly on my computer inside of Ableton Live. I can have several Virus instances running at the same time, and bonus: all of my sounds are there! It’s like a time capsule for me. Being able to play those sounds takes me right back to the moments when I made them. Pure joy! 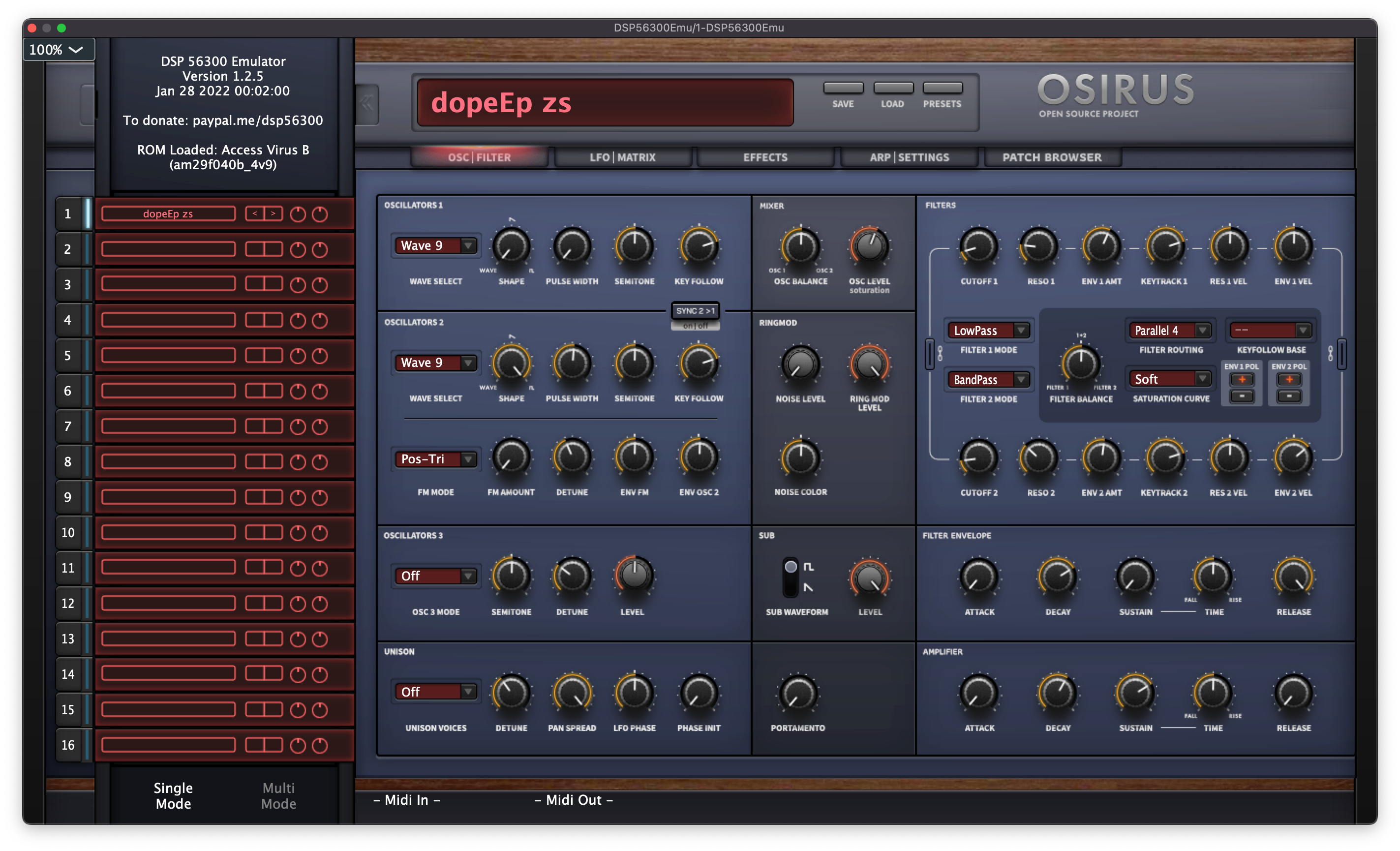 The Virus is still sold, but it’s not being developed any more. Christoph Kemper shifted his focus around 2010 to making and releasing a revolutionary tool for guitarists. It’s a box that can “learn” the nuances of a particular amp/cabinet/mic combo, and simulate it on its own. The Kemper Profiler has become its own big success in the guitar world.

When I was writing this, I was looking back through some archives of the Access-List and came across another message I sent in 1999:

At the time, I was having fun making music with my friend Jim Gearheart, who was an absolute shredder of a guitarist, singer, and lyricist. He left his guitar and Alesis Quadraverb at my house for a couple weeks, and that’s what probably led to that message. Maybe Christoph noticed a tiny bit… :D

So, if anyone from the Access team is reading this, thanks so much for the effort and love you put into those machines and to your community. It is a really special tool that has touched a lot of people in significant ways, and influenced music and other music-making machines.